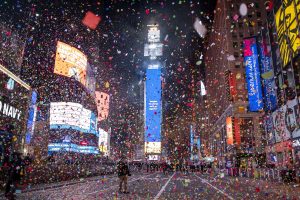 I felt a flutter of excitement and couldn’t help but smile. It was 11:57 p.m. on December 31. I was warm and cozy in PJs and standing in front of the television waiting to watch for a pre-taped ball of crystals descending in the frigid air of exuberance at Times Square.

Apparently, upwards of 10 million people did the same thing.

I began to wonder; what was it about this ball drop that has millions of Americans tuning in year after year?

As I watched waves of confetti in the sea of giddy faces, it dawned on me. What if our fascination with the ball dropping to mark the new year has nothing to do with anything new at all? What if it’s all about the comfort of something old – an old tradition that happens year after year, at the same time, in the same place, and often, with the same host (RIP Dick Clark).

At a time when we are supposedly ready to leave the past behind, we revel in the predictability of the present moment. Maybe that’s not such a bad thing. The old and the new are neither mutually exclusive nor mortal enemies. They are simply two halves of a whole. One would not exist without the other. One would not invoke anticipation of the future without the other evoking a longing for the past.

To glide gracefully and gleefully between the two may just be the momentum we aspire for in a new year. As we make plans or set intentions for 2022, let’s keep in mind that perhaps it’s that sacred connection to the old that makes a new year even happier.